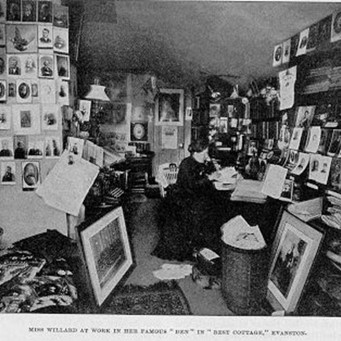 In the spring of 1900, hundreds of people received invitations to the dedication of the new National Woman’s Christian Temperance Union (WCTU) headquarters at “Rest Cottage, Evanston, Illinois.” Rest Cottage was the nickname Frances Willard had given her home – at least partially in jest as so much of her working life happened within its walls. But the home really did serve as a retreat for her from her sometimes frenetic work and traveling schedule – especially while her mother was alive and running the household.

Local newspaper accounts of the April 21st 1900 opening – 121 years ago today – reported that more than 200 people attended, and described the “prayer services, dedicatory speeches, and a tour of the new offices.” Evanston was proud that the WCTU had officially moved its headquarters here – after years of serving as the unofficial headquarters during Willard’s life. But the newspapers also described something that was not mentioned in the invitation – tours of parts of the house that had been Willard’s private rooms – including her office/den and her bedroom.

Willard had died suddenly of influenza two years previously in 1898, and left the home to the WCTU for the purpose of “teaching boys and girls the evil effects of alcoholics and tobacco upon the tissues of the body and temper of the soul.” In its grief over the untimely loss of Willard, the WCTU leadership left its beautiful headquarters in Chicago (more on The Woman’s Temple here) and retreated to the dry and sympathetic arms of Evanston. Willard had not said specifically how the WCTU should use the house to accomplish the purpose she had set forth, but by April 1900 the leadership of the WCTU had decided. They would open Rest Cottage that day as their new national headquarters and a museum that would keep Willard’s memory alive.

In many ways, it all made sense. Willard had centered her life and the work of the WCTU in the house. It already held much of what would eventually become the archives’ and museum’s collections. In 1891, Willard had called for “each Union, local, state and national, to preserve its archives sacredly, to have scrapbooks of its history written up…Literature, badges, banners,  mottoes, programs, photographs, should all be kept.” She noted that her own “private collection, including my mother’s many scrapbooks… will belong to this collection which I believe may become one of great value.” The house had also been visited as something of a shrine during Willard’s life, and took on this role in an even more pronounced way after her death. Lillian Stevens, who succeeded Willard as NWCTU president, commented that it was most appropriate for the organization to occupy “this sacred home,” which would be “hallowed by its association with our beloved leader and her mother” and would “be preserved just as it appeared in the sunset days of their life.”

The Frances Willard House Museum, as it is now called, has continuously operated as a museum since that day in 1900. As far as we know, it is the oldest museum in the U.S. dedicated to honoring a woman’s life and work. In 1965, in honor of the 100th anniversary of its construction and the importance of its story to our nation’s history, the house was named a National Historic Landmark. (Read more about the history and architecture of Rest Cottage)

Though we have been closed for on-site tours of the house this past year, we have worked to open Rest Cottage to the public in new and different ways, focusing on telling our stories, reaching new audiences, sharing the work (see our blog posts and social media for more details). We are currently working on a reopening plan for this summer according to the State of Illinois’ guidelines, with limited capacity, reserved tour times, and safety precautions. We will keep you posted as we make those decisions and ease into the changes.

Until then, you are cordially invited to join us as we welcome the next 121 years of Rest Cottage’s busy public life.