You are here: Home › About the House › History of the Museum

The history of Willard house tells the fascinating story of the flexible use of a house as a private residence, dormitory, workspace, memorial and museum. Its rooms were constantly adapted to the present needs of their occupants. Frances Willard began this tradition by re-using her father’s office as her own, and then later moving to the maid’s room and giving her office to Anna Gordon. She continued this with the construction of the Annex for her brother’s family, and when the Annex was no longer needed as a residence, she adapted it for use as office and dormitory space for the WCTU. When she died, the WCTU, through Anna Gordon, continued this tradition, moving their headquarters to the house, and adapting the private rooms as a memorial to Willard’s life. After a new headquarters building was built behind the house, the house began to be used as a museum and residence for the WCTU.

After Frances Willard died in 1898, during the President’s Address in the Twenty-Sixth Annual Meeting in October 1899, it was determined that WTCU Headquarters be moved to the Annex (where they remained until 1922 when they relocated to the new headquarters built on the west side of the property, behind Rest Cottage). Noting the significance of Rest Cottage for the WCTU, Lillian M. N. Stevens (the WCTU president after Willard), spoke of the house as a holy place, one befitting pilgrimages from WCTU devotees:

it is a privilege that cannot be too highly estimated that our national offices should be there, that our prayers, our plans and our daily work…should have the consecration of such surroundings and that Rest Cottage should thus continue to be the center from which our influence as a NWCTU can most widely radiate, a Mecca for the prayerful thought and devoted love of white ribboners everywhere.

In the spring of 1900 invitations were sent out to hundreds of people formally inviting them to the opening of the new WCTU headquarters at Rest Cottage. More than 200 people attended the ”Dedicatory Service” held Saturday afternoon, April 21, 1900 at 3pm. Newspaper reports from the time described the opening, the prayer service and speeches given, and also the new offices. They also described a tour of parts of the house that had up until then been private rooms. Although the invitations had not announced it, Rest Cottage was officially opened as a museum of and memorial to the life of Frances Willard that day. The newspapers reported that the south side of the house, especially the “Den” where “most of the famous white-ribboner’s literary work was done,” was being kept “in the condition in which Miss Willard left it” and was now open for public viewing. 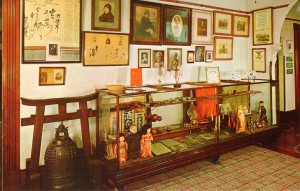 The house served as headquarters for the WCTU until 1910 when the ”Literature Building” was constructed on a back portion of the lot behind the house. All of the offices for the WCTU were moved into the new building. The first floor of the north side of Willard house was converted into a museum of WCTU artifacts and archival materials, and the second floor was used as bedrooms for WCTU workers. The south side of the house continued to be used as a museum of Willard’s private life, and the residence of Anna Gordon. The house continued to be used in this manner until Gordon’s death in 1931. The first floor remained as museum space, but the second floor bedrooms, on both the south and north-sides, were then used as sleeping space for WCTU workers.

Willard House is undergoing extensive restoration and re-evaluation of its role as a museum for the WCTU and a memorial to the life and work of Frances E. Willard. Part of this re-evaluation is an attempt to tell the story of the house as accurately as possible, and especially to tell of its history as a workplace and residence for the WCTU, both during and after Frances E. Willard’s life. By telling the story of its many uses, the life of a nineteenth century reformer and her organization can be more accurately told. In this way the house could more accurately reflect the story of 19th century women and reform movements in America, and also tell the early history of memorialization of women and the use of house museums in this process of memorialization. It is the goal of the Center for Women’s History and Leadership (originally, the Frances Willard Historical Association  established in 1994) to care for and manage the house, and to tell all of the stories of Willard House.