You are here: Home › About the House

Built in 1865, and patterned after a design by Andrew J. Downing, this Evanston house was home to Frances Willard (1839-1898). Both author and activist, Frances Willard lived and worked in this house during the years of her presidency of the Woman’s Christian Temperance Union (WCTU). For many of those years, the house also served as an informal national headquarters for the WCTU and a boarding house for its workers.

Established as a museum in 1900, the Frances Willard House Museum has a remarkably intact collection of original furnishings and objects — including furniture, artwork, textiles, family photographs, books, and Willard’s bicycle — all which help us tell the story of one of the most prominent social reformers in 19th century America.

We invite you to join us for a tour of this National Historic Landmark, the Frances Willard House Museum.

Click here to see a brief video that features the Willard House, interior and exterior. This short film was made by Evanston Photographic Studios and all rights are reserved by them.

History of the Museum

Learn how the original modest middle-class family home evolves over time to become an extended family home, a headquarters building, a boarding house, a public space for women, and ultimately the first museum in America dedicated to the life of a woman. 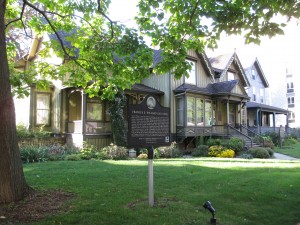 While Willard House was named a National Historic Landmark because of Willard, the story of the architecture of the house is equally fascinating.

Read about the care and keeping of a 150-year-old structure.

In honor of the 150th anniversary of Rest Cottage in 2015, five DePaul University history students studied Rest Cottage and its role in Frances Willard’s life and work.

Their essays include thoughtful explorations of individual rooms, pieces of furniture, Willard’s attitudes and writings about home, and how Rest Cottage functions as a character in the story of Frances Willard and the WCTU.

Tours are available by reservation only. Thursday and Sunday afternoons are preferred, but there is some scheduling flexibility. Visitors should request a tour at least 48 hours in advance using our online reservation form or by calling (847) 328-7500.