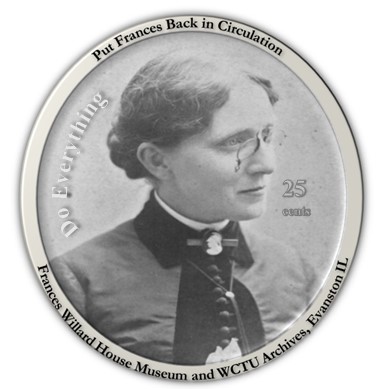 On January 13, 2021, the Circulating Collectible Coin Redesign Act of 2020 was signed into law. The bill directs the Treasury Department, through the U.S. Mint, to issue quarter-dollar coins featuring “prominent American women,” effective January 1, 2022 through the end of 2025. The act allows up to five coin designs per year and will feature women who have made significant contributions to U.S. history.

PUT FRANCES BACK IN CIRCULATION!

Frances Willard, one of the most prominent American women of the nineteenth century, was known worldwide for her social and political reform campaigns, her oratory, and her leadership and empowerment of women. She would be a priceless addition to the new series of quarters. Let’s see her “back in circulation” (to coin a phrase), as a reminder of her important work.  Find out how to nominate her below.

YOU CAN “DO EVERYTHING” TO NOMINATE FRANCES WILLARD

Recommendations are now being accepted through the National Women’s History Museum in partnership with the U.S. Mint, the Smithsonian Institution American Women’s History Initiative, and the Bipartisan Women’s Caucus as consultants for the Circulating Collectible Coin Redesign Act of 2020. To nominate Willard, fill out this form.

Here is the information you need for the nomination form, including suggestions for answering the “reason for inclusion” question. You can also read more about Willard’s life and work on our website.

Final note: This won’t be the first time Frances has appeared on coinage!  This fine souvenir coin was “minted” by the WCTU in 1933 to commemorate the anniversary of the 1873 Women’s Temperance Crusade.