You are here: Home › News & Events

Who gets to be a citizen? How did debates in Chicago around voting, lynching and women’s rights break down across racial lines? How do we think about these divisions today, and why are they relevant?

Race and Rights: Willard, Wells, Addams, the final installment of our “With You or Not at All” series exploring issues of racism in the woman’s suffrage movement, will focus on three significant Chicago-based women activists who were connected in their reform work, but who encountered difficulties in finding common ground. Ida B. Wells, Frances Willard and Jane Addams each worked to expand women’s rights and influence. However, they had significant disagreements in their approaches, informed by their differing views about the impact of race and racism. The discussion will focus on the historical breakdowns in feminism and race for Willard and Addams, and tell the story of Wells’ efforts to hold them each accountable. We will also explore the contemporary resonance of these debates in current movements and in this election year.

For more information and to register for this FREE online program, follow this link – Race and Rights: Willard, Wells, Addams.

Frances Willard and Ida B. Wells 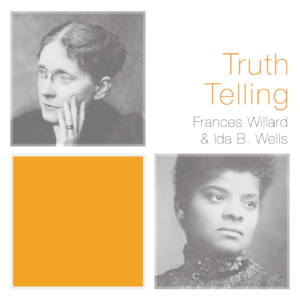 In the 1890s, Woman’s Christian Temperance Union President Frances Willard and journalist and activist Ida B. Wells fought a war of words in the international press over Willard’s lack of public support for Wells’ anti-lynching campaign. Wells called Willard’s moral leadership into question and demanded that Willard and the WCTU join her anti-lynching campaign. Under Willard’s leadership, the WCTU eventually passed resolutions opposing lynching, but Willard’s language and actions complicate her legacy.

Truth Telling: Frances Willard and Ida B. Wells is a community history project that explores this conflict. The project includes a digital exhibit of original archival sources, community conversations, and public programs. The goal of the project is to uncover the full truth of the conflict, and explore its many meanings and ramifications for our world today.