Discovered in the Frances Willard Papers in the Willard Archives on Halloween by a visiting researcher—who was looking for something else entirely– this note was written to Frances Willard by Lizzie Borden (yes, the Lizzie Borden who was accused of murdering her father and step-mother with an axe). The note, sent from Fall River, Mass., is dated July 23, 1893, and expresses Borden’s gratitude for a letter of support she had received from Frances Willard and Willard’s British counterpart, Lady Henry Somerset. Borden is especially appreciative of the faith the two women had in her “even though you did not know me.” Borden goes on to say that she is again offering a reward for information about the deaths of her parents, but “has little hope of finding the guilty one” after so long. She closes with the wish that she might meet Willard and Somerset sometime in the future.

Just a few weeks earlier, on July 6, 1893—soon after Borden was acquitted of the murders–a lengthy article had appeared in the Union Signal (the national newspaper of the WCTU) sympathetically describing Borden’s suffering during the ordeal of proving her innocence. Both this article and a later, brief mention in the September 21, 1893, Union Signal (which talks about Borden’s support group among the women of the Massachusetts WCTU) indicate that Borden was herself a member of the WCTU—a clue to why the leaders of the National and World’s WCTU had written to her.

Borden’s note in the Willard Archives is just one more example of the ways—some quite unexpected—in which the WCTU and Frances Willard are interconnected with so many people and events in national and international history. What will we find next?

Below are touched up images of the letter to make it more legible. 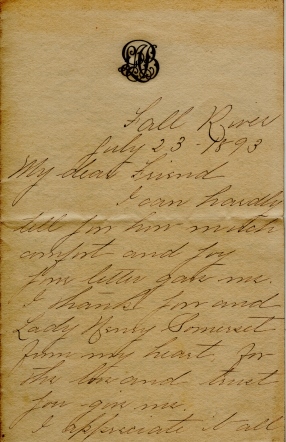 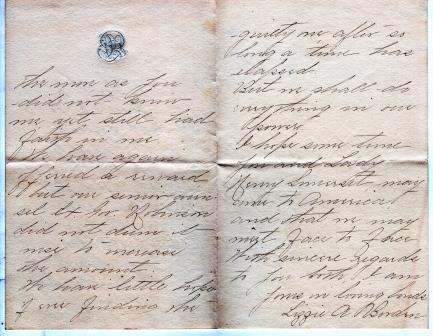