You are here: Home › Blog › How They Spent Their Summer Vacations
By The Archives on August 7, 2016 in From the Archives

Great minds think alike, it’s said, and that statement was well illustrated last week in the Willard Archives, when faculty members from three different institutions of higher learning descended on the Archives at the same time. The three professors were doing end-of-summer research on very different projects, but, as is so often the case in our friendly confines, found much that they could discuss and share with each other. 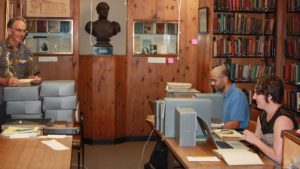 First to arrive was Charles Postel (San Francisco State University, and a Stanford Fellow for the upcoming academic year), working on a book about voluntary associations and equal rights in post-Civil War America. He was joined a week later by Leslie Dunlap (Willamette University, Oregon), working on a conference paper and on a book about interracial women’s activism; and by Thomas Lappas (Nazareth College of Rochester, NY), pursuing research on a book about temperance work among Native Americans, and on a conference paper. Professors Dunlap and Lappas, return visitors to the Willard Archives, were already well aware of its resources (Dunlap’s first of many visits was back in the 1990s; Lappas’ first inquiry was in 2007). For Professor Postel, the amount of material available was a pleasant and only slightly daunting surprise. Predictably, he spent quite a bit of time with the Union Signal newspaper indexes, but also delved into state and local meeting minutes, scrapbooks, and other materials. 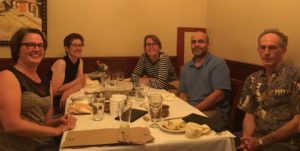 Scholars (and archivists) at play–enjoying delicious Indian food in Evanston

The collegial meeting of minds continued at dinner one night in a nearby restaurant, where shop talk and spirited conversation provided somewhat of a break from the intense research taking place in the Archives. Archivists Janet Olson and Lori Osborne joined the group for dinner, and were gratified to see how the work of organizing the Archives and making this material available was resulting in the creation of new knowledge that would ultimately benefit not only these scholars, but also their students.

To get an idea of what these researchers are so excited about, see the description of the Willard Archives’ holdings on the Frances Willard Historical Association’s Research page. For more information, contact us at archives@franceswillardhouse.org

“I’ve Been to Dwight!”
Restoration 7
Donate