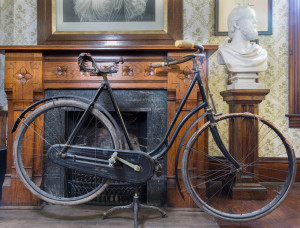 When Frances Willard’s health began to decline later in life, her doctor recommended that she get exercise and fresh air on a regular basis.  So Willard traveled to England to visit her colleague and friend, Lady Henry Somerset, who purchased a bicycle for her and had people on hand to teach Willard how to ride.  And she did learn how to ride a bicycle – at age 53!  Lore has it that she named the bicycle Gladys because riding it made her glad.

Willard’s Imperial Rover Coventry bicycle pictured here dates from 1892.  Over time, many of the organic materials, such as the leather for the saddle and the rubber tires have deteriorated.  This year we received a grant of $2,500 from the Evanston Bike Club to help restore the bicycle.  We have raised additional funds and are now less than $1,100 away from being able to get the bike restored.