When we work in an archive, it is easy to feel like we are treading on hallowed ground—constantly solemn, serious, and afraid to take anything for granted. But during a recent research trip to the Willard Archives, I discovered a surprisingly bizarre, and hilarious, object. 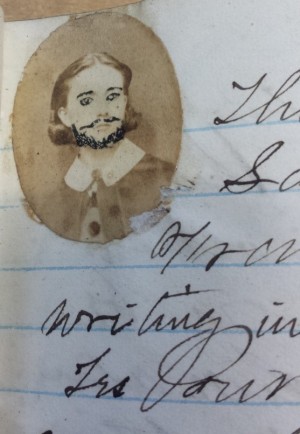 This photograph, pasted into the teenage Mary Willard’s unpublished diary (written in 1861), shook me out of my “serious” research demeanor. Like her older sister Frances, Mary wrote copiously in her diary, and also let this book circulate through the hands of her friends and siblings; they, in turn, would scribble a note, write a signature, or copy an inspirational quote inside (much like our modern-day yearbook).

Unlike our contemporary idea of “private” diaries—guarded with lock and key—nineteenth-century diaries allowed families to communicate with each other and document household events, big and small. With this historical knowledge, it is likely that this photograph was, well, embellished by someone (presumably Frances, or Mary’s brother, Oliver) as a friendly joke.

Then, in another 1861 diary of Mary’s, I found the unembellished image, sans facial hair, pasted inside. I discovered that this image was actually a photograph of her sister, Frances, labeled with her nickname written underneath, “Frank.” 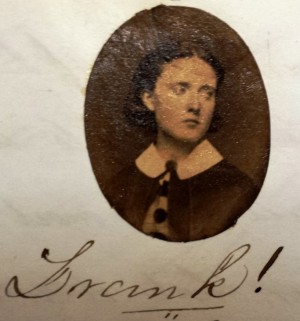 Like many of the holdings at the Willard Archives, these pictures open up an entirely untouched world of the Willard family, more like our own than we may have originally expected. While it is tempting to be guided by Frances Willard’s substantial efforts in “serious business”—like social reform, securing women’s voting rights, and, basically, running the world with all of her tireless energies—we should also feel free to remember that people like Frances and Mary Willard were not so “above it all” to laugh at themselves and each other.