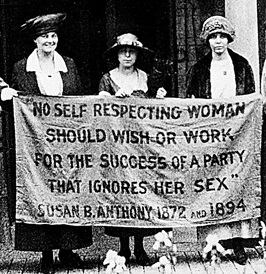 Alcohol consumption in the 19th century was far greater than it is today, and fueled endemic domestic violence. Willard called attention to the abuse of women and children and galvanized the attention of the world. She was a well-known author and public speaker (by 1890, she was the second most well-known and influential woman in the world after Queen Victoria), able to captivate the imaginations and mobilize the feet of countless women to support her causes.  Much of her genius lay in appealing to the women of the time – she was a “feminine feminist”.  For example, she linked the issue of Home Protection (the main concern of women regarding alcohol and its abuse) and Suffrage thereby motivating women of all walks of life into civic and political engagement, previously unheard of.

Willard recognized, developed, and implemented the use of the Woman’s Christian Temperance Union (WCTU) as a political organizing force.  Under her leadership, the Union increasingly saw its role as an organization advocating for broad social as well as political change.  Willard called this wide program of reform her “Do Everything” policy, reflecting her advocacy not just of temperance but of women’s rights, social justice, and world peace.  Willard also recognized the need not to just advocate for women’s empowerment, but to provide women with the skills they would need in this new version of society. She often called the organization the “WCTUniversity” providing training for women to think on their feet, to speak in public, and to run an organization.

Under her leadership, the WCTU grew to be the largest non-secular organization of women in the 19th century.  She spread its movement worldwide as the founder and first president of the World Woman’s Christian Temperance Union.  The WCTU has proposed, supported, and helped establish protection of women and children at home and work, stiffer penalties for sexual crimes against girls and women, traveler’s aid, police matrons, pure food and drug laws, legal aid, passive demonstrations, and world peace, among many others.