You are here: Home › Overview › History of WCTU

The WCTU – Committed to Reform 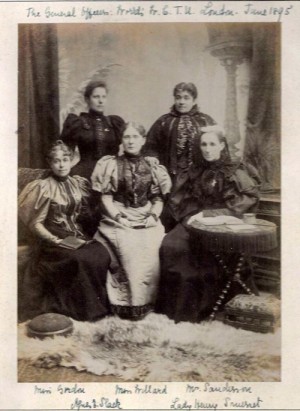 In the winter of 1873-74, the desire for temperance catalyzed largest mass movement of women the country had ever witnessed, affecting small cities and towns all over America except for the Deep South. Beginning in New York and Ohio, thousands of women took to the streets protesting the sale of beer and alcohol in the saloons of their towns. The women were reacting to a climate of greatly increased alcohol consumption after the Civil War and to the pressure of economic forces beyond their control. The brewery and distilling businesses had grown to be national industries; improved production methods increased the supply of alcoholic beverages and an expanded railroad system delivered the alcohol to local saloons more quickly.

Founded in 1869, the Prohibition Party pushed actively for further legislative control and prohibition of the national alcohol industry. The women who participated in what came to be called the “Woman’s Temperance Crusades,” however, perceived an immediate and local threat to their families and communities that a national political party seemed unable to address. Initial groups in Fredonia, New York and Hillsboro and Washington Court House, Ohio, after listening to a lecture by Dr. Dio Lewis, were moved to a non-violent protest against the dangers of alcohol. Normally quiet housewives dropped to their knees in pray-ins in local saloons and demanded that the sale of liquor be stopped. In three months the women had driven liquor out of 250 communities, and for the first time felt what could be accomplished by standing together.  Throughout the winter and well into the spring of 1874, regular prayer meetings and protests took place. The women succeeded in persuading hundreds of saloon owners to shut down their businesses. More than 900 communities in 31 states and territories witnessed a crusade; many of these areas went dry because of the women’s efforts.

As the spring wore on, however, opposition to the Crusades grew. Increasingly, former supporters began to question the value of the Crusades. Newspapers voiced strident criticism of women marching. Churches and temperance organizations began to see the non-violent protest as too labor intensive, too costly, and ultimately counterproductive to the long-term goal of turning America into a dry nation. Elizabeth Cady Stanton urged the Crusaders to work for woman suffrage, which the suffragists believed would give women real power to address a broad spectrum of social issues. The combination of these disparate forces brought an end to the Woman’s Temperance Crusades in the summer of 1874.

That summer, at the first meeting of the National Sunday School Assembly held in Chautauqua, New York, a group of women called for a national convention to establish an organization of women who would work to ensure that the gains of the Crusades would have lasting influence. Pre-organizational discussion was held by the women. They decided to hold a national convention that November in Cleveland and the WCTU was formed. Mrs. Annie Wittenmyer was elected president; Miss Frances E. Willard, corresponding secretary; Mrs. Mary Johnson, recording secretary; and Mrs. Mary Ingham, treasurer.

The WCTU institutionalized, nationalized, and expanded on the Crusades to combat the national market and trade in alcohol. Initially, the WCTU continued to use the method of moral suasion and invoked the moral authority of women to create individual and local change. All around the country the WCTU formed local unions and used various methods to reduce drinking, including holding prayer meetings, signing temperance pledges, personal visits to homes and saloons, and personal contacts with drinkers. The national WCTU, under the leadership of first president Annie Turner Wittenmyer, focused on developing methods to campaign for the national regulation of alcohol, creating a national weekly paper, developing literature to be used to educate the public about the harmful effects of alcohol, and using petitions to be presented to the U.S. Congress.

Behind the WCTU’s temperance reform was “protection of the home.” The slogan “For God and Home and Native Land” (later changed to “Every Land”) expressed the WCTU’s priorities. Through education and example the WCTU hoped to obtain pledges of total abstinence from alcohol, and later also tobacco and other drugs. The white  ribbon bow was selected to symbolize purity, and the WCTU’s watchwords were “Agitate – Educate – Legislate.”

Local chapters were called “Unions” and were largely autonomous, but closely linked to the state unions and national headquarters. There were clear channels of authority and communication and the WCTU quickly became the largest woman’s organization in the United States (and later, in the world.)

The crusade against alcohol was a protest by women, in part, of their lack of civil rights. Women could not vote. In most states women could not have control of their property or custody of their children in case of divorce. There were no legal protections for women and children, prosecutions for rape were rare, and the state-regulated “age of consent” was as low as seven.

Most local political meetings were held in saloons from which women were excluded. At the end of the 19th century Americans spent over a billion dollars on alcoholic beverages each year, compared with $900 million on meat, and less than $200 million on public education. 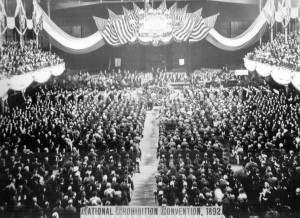 In 1879 the WCTU elected Frances E. Willard as its second president. Willard broadened the WCTU’s methods and its program for reform and turned to organizing political means in addition to moral persuasion to achieve total abstinence. Under her leadership, the WCTU increasingly saw its role as an organization advocating for broad social as well as political change. The WCTU began working to reform labor laws, child welfare laws, and age of consent laws. It advocated for prison reform, temperance education in schools, and woman suffrage, while continuing to seek individual commitments to personal abstinence, and legislative mandates for local, state, and national prohibition. Willard called this wide program of reform her “Do Everything” policy, and under her leadership the WCTU grew to be the largest organization of women in the nineteenth century. As historian Catherine Murdoch notes, the WCTU was “the most popular, and by many accounts the most progressive, women’s association of the nineteenth century.” By 1890 more than half of the counties in the United States had a WCTU chapter. By 1894, under “home protection” the WCTU was endorsing women’s suffrage. By 1896, 25 of the 39 departments of the WCTU were dealing with non-temperance issues. To promote its causes, the WCTU was among the first  organizations to keep a professional lobbyist in Washington, D. C.