You are here: Home › Blog › From Educator to Activist: Frances Willard and Education for Girls
By Guest Blogger on August 15, 2017 in Uncategorized 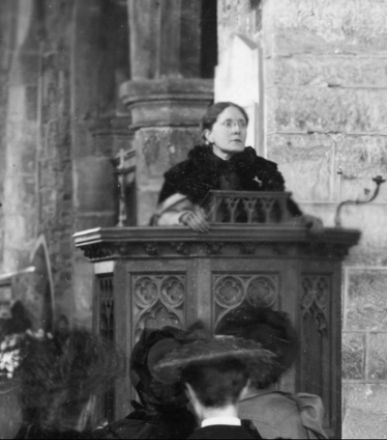 As a teacher, Willard pushed for her students to find a career after graduating, and in 1871, Willard became president of Evanston’s College for Ladies, where she continued to promote self-governance for her pupils. Evanston College for Ladies was absorbed by Northwestern following the Chicago fire, and at Northwestern,  Frances Willard became the first Dean of Women in a mixed gender university

In  1879,  when  Frances  Willard  was  elected  President  of  the  WCTU,  she continued to push for girls to get an education. She immediately published newsletters for children, Annual Leaflets were produced aimed at young women, and she publish books, such as Occupations for Women (1897), which listed a wide variety of careers women could pursue after college. Willard used her experience as a teacher to educate WCTU members as to how all of these issues are connected, and why women fighting against temperance should care about suffrage and educating their children.

Willard’s concerns about education for women are still relevant— there are many issues today concerning the impact gender has on education. From elementary school through college, women face challenges due to their gender that affects the way they learn, interact, and excel in school and has a huge impact on girls quality of education, and if they chose to continue it in college or graduate school.

Guest blog by Sarah O’Brien, a graduating senior at DePaul University studying History of Art and Architecture with a minor in Museum Studies.

Please note: tours of the Willard House are suspended until further notice. Please check back for our reopening plans.

Please note: the WCTU Archives is closed to researchers at this time.

Research in the WCTU Archives is by appointment only. Please contact our archivist for more details at archives@franceswillardhouse.org.