You are here: Home › Blog › Digging Through History
By Guest Blogger on March 15, 2017 in From the Archives

Digging through history is a lot like digging through dirt: it’s gonna get messy, but you’ll find some interesting stuff along the way.

What is now the archives was once known as the Administration Building, built in 1922 to serve as the WCTU’s bustling headquarters. Now primarily a repository for organizational records, most researchers won’t venture beyond the Library, the 1940 two-story addition that’s part reading room and part archival storage. It’s also a cozy hub for the time- and space-consuming work research entails.

But the stuff we’ve been sorting through wasn’t so centralized. It found its way over many decades into every corner, nook, shelf, bookcase, and hidden closet of the building’s four expansive floors. We’ve been muddling through this musty mass of material for several years now, trying to distinguish the trash from the treasure.

Speaking for myself, as part of a small team of archival processors, my first goal when I began the first sweep for goods was simply to shrink the distance between the far-flung material and our second-floor processing room. Discovering what we had and bringing it closer to “home base” would give us a better idea of the breadth of records we were dealing with. Glen, FWHA’s Executive Director, likened it to dealing with an invasive weed: first stop it from spreading, and then shrink it inward.

So starting with filing cabinets and bookshelves scattered around the building, I boxed and labeled everything I came across that wasn’t immediately trash-worthy. This eventually cleared four different rooms, three of which were refurbished and transformed into archival shelving space for the new abundance of files we were generating from the processing. 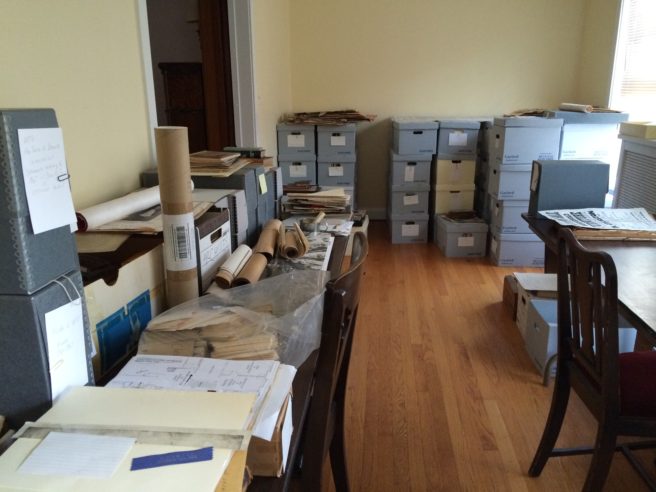 Part of the collection during the sorting process. This is known as the Lori Osborne Honorary Sorting Room.

Slowly but surely, we chipped away at what seemed like interminable heaps of unprocessed boxes—some remnants from the organization’s erstwhile offices and some shipped to us from WCTU members past and present. Books, documents, photos, flyers, leaflets, posters, flags, ledgers, personnel records, news clippings, reference files, conference proceedings, film reels, exhibits, speeches… We’ve filled hundreds of archival boxes with stuff from at least a dozen rooms. And this is just the first run-through. The next stage of processing will entail a much more detailed combing-through of the material to better determine what makes sense to keep, what to toss, and what could be sold or donated.

Currently, I’m enjoying the final leg of Phase 1: the attic. Bordered by dusty, labyrinthine closets, the vast space seemed to be treated just like attics in regular homes: as the dumping ground for “everything else.” But speaking as a lover of history, what better place to get in literal touch with the WCTU’s heritage!

The Attic, aka The Chad Comello Honorary Sorting Room

The transformation around the building and the archives has been incredible, and it’s been a team effort from the beginning. Though we’re close to making order out of what we have already, we expect to continue getting shipments of boxes from WCTU members and defunct chapters indefinitely, so the digging will continue. (We received another roomful from the California South WCTU in August of last year.) Most of it won’t be seen by visitors or the general public, but we’re happy to do it to serve the legacy of Frances Willard and the organization she spearheaded. 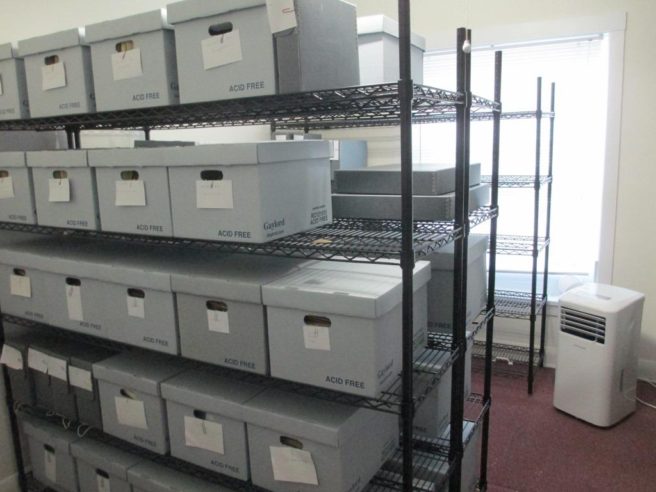 One of the refurbished storage rooms holding World WCTU records.

Please note: tours of the Willard House are suspended until further notice. Please check back for our reopening plans.

Please note: the WCTU Archives is closed to researchers at this time.

Research in the WCTU Archives is by appointment only. Please contact our archivist for more details at archives@franceswillardhouse.org.