Ever wonder what Frances Willard carried around with her in the satchel she named “Old Faithful”? Pictured above are a few of the papers she had in it upon her death and includes pamphlets, a newspaper clipping, a letter, and invitations. These items remained there until recently when conservators working on the satchel discovered and removed them. Old Faithful was named … Read more

When we work in an archive, it is easy to feel like we are treading on hallowed ground—constantly solemn, serious, and afraid to take anything for granted. But during a recent research trip to the Willard Archives, I discovered a surprisingly bizarre, and hilarious, object. This photograph, pasted into the teenage Mary Willard’s unpublished diary … Read more

Week 2 update: The wallpaper has been fully removed to reveal the original plaster, a mystery opening, and a previously unknown wallpaper pattern. The completion of this work also means we have to say “goodbye” to Mike and Zach. It has been a pleasure working with them. The plasterers  from Bob Jirasek Plastering have started … Read more

The restoration work has begun!  The furniture has been moved out of all 4 rooms being restored in Rest Cottage (Parlor, Entry Hall, Office, and Dining Room) and the wallpaper is being stripped from the walls.  (Over time, we will be introducing more proper restoration terminology, but let’s start out simply, shall we?)  Already we … Read more

The Woman’s Christian Temperance Union is best known for its efforts to rid the world of alcohol. But one of its most successful campaigns – one that shapes laws in every state to this day – focused not on “demon rum” but on sex, specifically, the age of consent to sexual intercourse. While conducting research for my dissertation, titled “Purifying the World: Americans and International Sexual Reform,” I visited the Frances E. Willard Memorial Library and Archives to find documents that could help me shed light on the WCTU’s activism to raise the age of consent in the United States and India. In the late 1800s, the age of consent in both countries was set by interpretations of British Common Law, placing it at an age that may seem shockingly low to a modern reader: it was 10-12 years of age in most states in the U.S. (though as low as 7 in Delaware), and 10 in India.

In addition to their domestic efforts, American WCTU women saw themselves as part of a sisterhood that extended beyond national boundaries. As part of the WCTU’s missionary impulse, it supported the work of a number of female physicians working abroad. For example, at the Willard Archives I discovered an Indian periodical (Fig. 2) with an article by Dr. Emily Brainerd Ryder. Dr. Ryder was an American medical missionary to India, who wrote numerous books and articles that publicized the crusade to raise the age of consent in India for an English-speaking audience. The article provides crucial insight into the development of Dr. Ryder’s thought, which was influential in shaping the international conversation about the age of consent. While firm in her belief that the U.S. was at the pinnacle of civilization, Dr. Ryder nonetheless refuted the then common assumption that women from India reached sexual maturity earlier than white Euro-American women as a result of their racial characteristics and India’s tropical climate. Instead, she argued that a lack of women’s education was to blame for what she perceived to be India’s sexual backwardness.

-Eva Payne is a Doctoral Candidate in the American Studies Program at Harvard University
Contact: epayne[ATsymbol]fas[DOT]harvard[DOT]edu

Discovered in the Frances Willard Papers in the Willard Archives on Halloween by a visiting researcher—who was looking for something else entirely– this note was written to Frances Willard by Lizzie Borden (yes, the Lizzie Borden who was accused of murdering her father and step-mother with an axe). The note, sent from Fall River, Mass., … Read more 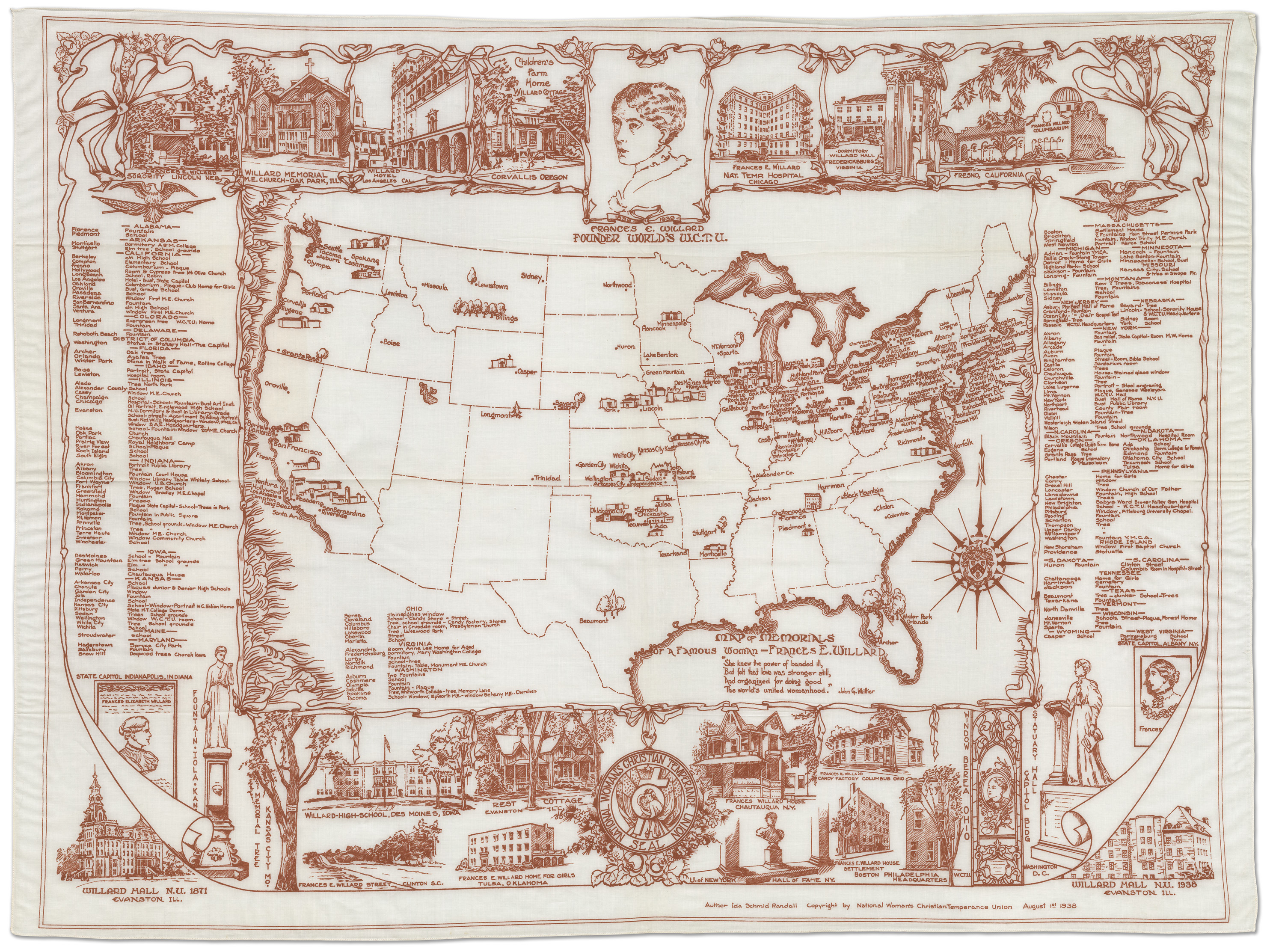 The story of the Willard Centenary Souvenir Map

One of our favorite artifacts is this 36”x26” rectangle of cream-colored cotton, printed in brown with a map of the United States as of 1938. If you look closely, you can see that most of the states contain one or several dots. Each one indicates the location of a structure—school, statue, drinking fountain, park—that had been named in honor of Frances E. Willard, social reformer, leader of women, president of the Woman’s Christian Temperance Union (WCTU) from 1879 until her death in 1898. The map itself was one of many objects, projects, and events produced by the WCTU to commemorate the 1939 centenary of Willard’s birth (1839).

In April, 1938, in a letter describing the map project, WCTU president Ida B Wise Smith wrote,  “Someone has said, ‘There are more memorials to Frances Willard than to any other woman,’ and we are attempting to prove this statement by gathering information as to where there are schoolhouses named for Miss Willard, where are hospitals, as in Chicago, settlement houses, as in Boston, Homes for Girls, as in Oakland, Tulsa, Toledo and Chattanooga, and so forth, in an almost endless, amazing list.”

After WCTU members all over the country reported to the National Headquarters in Evanston on the existence of memorials in their areas, the list of structures to be included on the Willard Centenary Souvenir Map reached 263. (By the end of the Centenary year, another 250 had been documented.)

The map was drawn by Ida Schmid Randall, “artist, architectural draughtsman, and experienced cartographer,” as the Union Signal described her (July 23, 1938). A sketch of Willard as a young woman is at the center top of the design. A number of the memorial sites are featured on the panels (including perhaps the most famous–her statue in the US Capitol), along with a full listing of all 263 buildings, statues, plaques, trees, drinking-fountains, and stained-glass windows. The ribbons and bows that tie the images together represent the white ribbon which has been the symbol of the WCTU since 1877.

According to correspondence in the Centenary files in the Willard Archives, the master map cost $400. The “cut” from which the map was printed was produced by Mr. M. Hermas of Evanston, and the maps were produced by Waverly Fabrics, in New York. A total of 8,800 maps were produced. WCTU unions across the US were encouraged to purchase a supply of the maps to sell or to distribute to local schools and churches during 1939. The maps were advertised in the Union Signal, the WCTU’s national weekly newspaper, starting in mid-1938, and went on sale for the first time at the National WCTU Convention in San Francisco in August, 1938. The Willard Centenary Souvenir maps were priced at $1 each (with discounts for quantity purchases).

The first question we usually get when someone sees the map is, “What is it FOR?” The order form for maps listed a few possibilities, including a wall hanging for schools, Sunday School classrooms, or WCTU reading rooms, or as a backdrop for Willard Centenary displays. And each map came with a document that described its history, and listed, state by state, the memorials pictured on it. We can’t help but wonder how many uses the WCTU women found for this informative, inspiring, and versatile souvenir of Willard’s centenary.

When Frances Willard’s health began to decline later in life, her doctor recommended that she get exercise and fresh air on a regular basis.  So Willard traveled to England to visit her colleague and friend, Lady Henry Somerset, who purchased a bicycle for her and had people on hand to teach Willard how to ride. … Read more

September 2015 marks the 5th year anniversary of my involvement with the FWHA, the Willard House Museum and Archives, the WCTU, and the story of the most amazing historical figure I’ve ever known, Frances Willard. I knew little about Willard or the Museum, even though I was an undergraduate student at Northwestern University (biology and … Read more