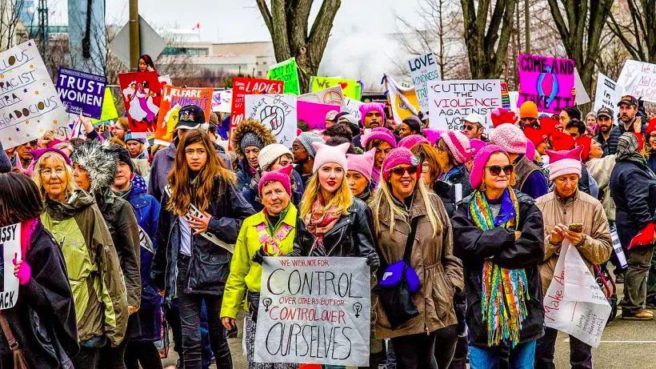 Women’s March on January 21, 2017, the day following the inauguration of Donald Trump. An estimated one-half million peaceful people listened to speakers, music, and then marched in Washington D.C. Close to five million are estimated to have marched world-wide. Source: Wikimedia Commons

Following the 2016 Presidential Election, there was a call to action for women, inspired by the historic first female presidential candidate, to get involved in politics and fight for policies that would be best for women and their communities. This uniting of women (and men) with such fervor for politics and policy seemed unprecedented, but we can find many similarities in the powerful and influential work done by Frances Willard and the Women’s Christian Temperance Union to bring together women advocates around the world more than 100 years before the founding of today’s “Pantsuit Nation”.

Frances Willard and the Women’s Christian Temperance Union were able to create such a successful organization that allowed women to get involved in politics by creating an political environment which felt safe and familiar for women who were just beginning to become involved in the public sphere and which played upon women’s duties as mothers and wives to protect their home and community. Familiar spaces for women such as churches where women engaged in discussions of policy as well as sang hymns and quotes scripture were essential parts of Willard’s development of the WCTU as discussed in mass-produced publications such as “How to Conduct a Public Meeting” and “How to Organize a Woman’s Christian Temperance Union.” By recognizing that femininity and traditional female values are not incompatible with advocacy and protest, the WCTU opened the doors for many women to get involved.

Today, many women are reacting to a political atmosphere which threatens and demeans the power of femininity. Like Willard and the WCTU, women are embracing femininity and traditional feminine practices as a part of protest, most commonly in the form of crafting. The popular “Pussy Hat Project” is an excellent example of women coming together to protest through the use of the traditionally feminine practice of knitting and crocheting as well as the feminine color pink and the reference to female genitalia. The effects of Willard’s practices to bring together the women of the WCTU through the encouragement of femininity as a part of advocacy are echoed even today in these contemporary practices as women embrace femininity as an important asset for social change.

Guest blog by Claire Sandberg, a graduating senior at DePaul University studying History of Art and Architecture with minors in Women and Gender Studies and Museum Studies.

Digging Through History
From Educator to Activist: Frances Willard and Education for Girls
Donate