Independence Day in Evanston in 1871 was marked by parades, bands, fireworks, a baseball game, and many speeches. Not an unusual way to celebrate the 4th—except that these activities were organized by local women and were a fundraising event for the nascent Evanston College for Ladies—with the highlight of the day being the placement of the cornerstone for the new building. The day-long series of events was masterminded by the Women’s Educational Aid Association and trustees of the Evanston College for Ladies, led by its President, Frances E. Willard. She had spent months planning and promoting the event—as she described in her autobiography, she “slept and woke 4th of July.”

Speakers included the President of Northwestern University, Erastus O. Haven (the man who had required that the University become co-educational). Robert Cumnock, founder of the School of Oratory, read the Declaration of Independence, and there were several other prayers and orations throughout the day (all of them, please note, delivered by men). Afternoon events included a “base ball match between the Ladies College nine and Northwestern University nine,” a regatta on the Lake, and a “comic representation” at the chapel. The Woman’s Fourth of July in Evanston was covered in great detail in the next day’s Chicago Tribune, and was considered a great success. The Northwestern student newspaper, the Tripod, reported that a total of $25,000 was pledged that day, plus $2500 from the sale of tickets. 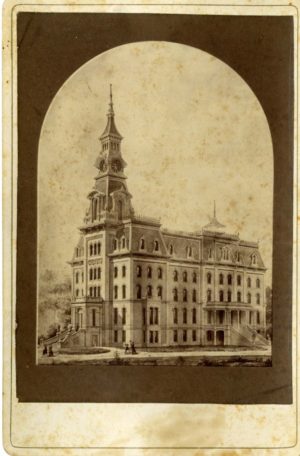 The Evanston College for Ladies opened in September, 1871, with 236 students. However, many of the College’s backers lost their money in the Great Fire in Chicago the next month and were unable to fulfill their pledges. In 1873, the Evanston College for Ladies became the Woman’s College of Northwestern, with Willard as the first Dean of Women. Willard resigned in 1874, and soon thereafter became involved in the new Woman’s Christian Temperance Union.

The Evanston College for Ladies/Woman’s College building, for which the cornerstone was laid on July 4, 1871, became a women’s dormitory–officially named Willard Hall in 1901—until 1938, and was later briefly used as a student union; it then served as Northwestern’s Music Administration Building until 2015.

Both the Willard Memorial Library/Archives and the Northwestern University Archives hold information about Willard’s terms as President of the Evanston College for Ladies and as Dean of Women at Northwestern. See also the digital exhibit “Radical Woman in a Classic Town,” chapters 4 and 5.

Submitted by the Frances Willard Memorial Library and Archives  archives@franceswillardhouse.org